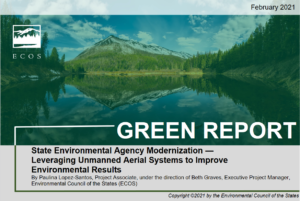 States and tribes increasingly are turning to a valuable tool – drone technology – to enhance environmental protection in areas ranging from mapping and monitoring to inspections and emergency response. In recent years, states have established the use of drones within various environmental programs to boost water monitoring of harmful algal blooms, E. coli, cyanobacteria, bathymetric, and per- and polyfluoroalkyl substances. Drone technology has also facilitated state inspections of dams, mines, watersheds, groundwater, drinking water, and coastlines, in addition to assisting in volume and construction estimation. Tribes too have expanded their use of drones to a variety of environmental programs to collect information and complete projects more safely and efficiently.

In February, ECOS published a comprehensive Green Report detailing state environmental agency use of drones. State Environmental Agency Modernization — Leveraging Unmanned Aerial Systems to Improve Environmental Results presents case studies from 19 states. Each study encompasses a brief summary of the program, current and planned activities, application highlights, lessons learned, program contact information, and useful resources. The most commonly reported use of drones is for emergency response, cited by 12 states, followed by the use of drones for water monitoring, mapping, and mining, noted by eight states. The document presents a wealth of information such as sample procedures, drone specifications, and examples of pre-flight checklists.

The following are just a few state examples cited in the report:

Tribes are also leveraging drones to assist with field operations and project investigations. For example:

Oops! We could not locate your form.